OCTOBER 3, 1789, from the U.S. Capitol in New York City, President George Washington issued the first Proclamation of a National Day of Thanksgiving and Prayer to Almighty God.

Just one week earlier the first session of the U.S. Congress successfully approved the Bill of Rights, which put ten limitations on the power of the new Federal Government.

The States were concerned the Federal Government would get too powerful.

The Preamble to the Bill of Rights explained:

“The Conventions of a number of the States, having at the time of their adopting the Constitution, expressed a desire, in order to prevent misconstruction or abuse of its powers, that further declaratory and restrictive clauses should be added…as amendments to the Constitution of the United States.”

The First of the Ten Amendments restricting the Federal Government’s abuse of its powers began:

“CONGRESS shall make no law respecting an establishment of religion,

OR PROHIBITING THE FREE EXERCISE THEREOF;

or abridging the freedom of speech, or of the press;

or the right of the people peaceably to assemble,

and to petition the Government for a redress of grievances.”

President George Washington thanked God for the “Constitutions of government…particularly the national one now lately instituted,” stating in his Proclamation, OCTOBER 3, 1789:

“Whereas it is the DUTY of all nations to acknowledge the Providence of ALMIGHTY GOD, to obey His will, to be grateful for his benefits, and humbly to implore His protection and favor; and

‘to recommend to the People of the United States A DAY OF PUBLIC THANKSGIVING AND PRAYER to be observed by acknowledging with grateful hearts the many signal favors of ALMIGHTY GOD,

especially by affording them an opportunity peaceably to ESTABLISH A FORM OF GOVERNMENT for their safety and happiness;’

Now, therefore, I do recommend and assign Thursday, the twenty-sixth day of November next, to be devoted by the People of these United States to the service of that GREAT AND GLORIOUS BEING, who is the BENEFICENT AUTHOR of all the good that was, that is, or that will be;

That we may then all unite in rendering unto Him our sincere and humble thanks,

for His kind care and protection of the People of this country previous to their becoming a Nation;

for the signal and manifold mercies, and the favorable interpositions of HIS PROVIDENCE, which we experienced in the course and conclusion of the late war;

for the great degree of tranquility, union, and plenty, which we have since enjoyed,

for the peaceable and rational manner in which we have been enabled to ESTABLISH CONSTITUTIONS OF GOVERNMENT for our safety and happiness, and PARTICULARLY THE NATIONAL ONE NOW LATELY INSTITUTED,

for the CIVIL AND RELIGIOUS LIBERTY with which we are blessed, and the means we have of acquiring and diffusing useful knowledge;

and in general for all the great and various favors which He hath been pleased to confer upon us.

And also that we may then unite in most humbly offering our prayers and supplications to THE GREAT LORD AND RULER OF NATIONS, and beseech Him

to pardon our national and other transgressions,

to enable us all, whether in public or private stations, to perform our several and relative duties properly and punctually;

to render OUR NATIONAL GOVERNMENT a blessing to all the People, by constantly being A GOVERNMENT OF WISE, JUST AND CONSTITUTIONAL LAWS, discreetly and faithfully executed and obeyed;

to protect and guide all Sovereigns and Nations (especially such as have shown kindness unto us) and to bless them with good government, peace, and concord;

TO PROMOTE THE KNOWLEDGE AND PRACTICE OF TRUE RELIGION AND VIRTUE, and the increase of science among them and us;

and generally to grant unto all Mankind such a degree of temporal prosperity as He alone knows to be best.

Given under my hand, at the city of New York, the 3rd of October, IN THE YEAR OF OUR LORD one thousand seven hundred and eighty-nine. -George Washington.”

The Moral Liberal contributing editor, William J. Federer, is the bestselling author of “Backfired: A Nation Born for Religious Tolerance no Longer Tolerates Religion,” and numerous other books. A frequent radio and television guest, his daily American Minute is broadcast nationally via radio, television, and Internet. Check out all of Bill’s books here.

On JULY 26, 1775, Benjamin Franklin became the first Postmaster General of the United States, a position he held under the British Crown before the Revolution.

He then proposed a General Fast, which was approved by the Colony’s Council and printed in his Pennsylvania Gazette, December 12, 1747:

“As the calamities of a bloody War…seem every year more nearly to approach us…there is just reason to fear that unless we humble ourselves before the Lord & amend our Ways, we may be chastized with yet heavier Judgments,

We have, therefore, thought fit…to appoint…a Day of Fasting & Prayer, exhorting all, both Ministers & People, to observe the same with becoming seriousness & attention, & to join with one accord in the most humble & fervent Supplications;

That Almighty God would mercifully interpose and still the Rage of War among the Nations & put a stop to the effusion of Christian Blood.”

He established a volunteer fire department, a circulating public library, an insurance company, a city police force, a night watch and a hospital.

He set up the lighting of city streets and was the first to suggest Daylight Savings Time. He invented bifocal glasses, the Franklin Stove, swim fins, the lightning rod, and coined the electrical terms “positive” and “negative.”

In 1754, Franklin wrote a pamphlet, “Information to Those Who Would Remove to America,” for Europeans interested in sending their youth to this land:

“Hence bad examples to youth are more rare in America, which must be a comfortable consideration to parents. To this may be truly added, that serious religion, under its various denominations, is not only tolerated, but respected and practised.

Atheism is unknown there; Infidelity rare and secret; so that persons may live to a great age in that country without having their piety shocked by meeting with either an Atheist or an Infidel.

And the Divine Being seems to have manifested his approbation of the mutual forbearance and kindness with which the different sects treat each other; by the remarkable prosperity with which he has been pleased to favor the whole country.”

On September 28, 1776, as President of Pennsylvania’s Constitutional Convention, Benjamin Franklin signed the State’s first Constitution, “the most radically democratic Frame of Government the world had ever seen.

“Government ought to be instituted…to enable the individuals…to enjoy their natural rights…which the Author of Existence has bestowed upon man; and whenever these great ends…are not obtained, the people have a right…to change it, and take such measures as to them may appear necessary to promote their safety and happiness…”

Nor can any man, who acknowledges the being of a God, be justly deprived or abridged of any civil right…

No authority…shall in any case interfere with…the right of conscience in the free exercise of religious worship.”

“And each member…shall make…the following declaration, viz: I do believe in one God, the Creator and Governor of the Universe, the Rewarder of the good and the Punisher of the wicked. And I do acknowledge the Scriptures of the Old and New Testament to be given by Divine Inspiration. And no further or other religious test shall ever hereafter be required.”

Pennsylvania’s Constitution had in Section 45:

“Laws for the encouragement of virtue, and prevention of vice and immorality, shall be…constantly kept in force…Religious societies…incorporated for the advancement of religion…shall be encouraged.”

At the end of the Revolutionary War, Franklin signed the Treaty of Paris, September 3, 1783, which began: “In the name of the Most Holy and Undivided Trinity…”

As Pennsylvania’s President (Governor), Ben Franklin hosted the Constitutional Convention in Philadelphia, where on June 28, 1787, he moved:

“That henceforth prayers imploring the assistance of Heaven, and its blessing on our deliberations, be held in this Assembly every morning.”

“THE BODY of BENJAMIN FRANKLIN – Printer.
Like the cover of an old book,
Its contents torn out,
And stripped of its lettering and gilding,
Lies here, food for worms;
Yet the work itself shall not be lost,
For it will (as he believed) appear once more,
In a new, and more beautiful edition,
Corrected and amended By The AUTHOR.”

“Only a virtuous people are capable of freedom.

As nations become corrupt and vicious, they have more need of masters.”

The Moral Liberal contributing editor, William J. Federer, is the bestselling author of “Backfired: A Nation Born for Religious Tolerance no Longer Tolerates Religion,” and numerous other books. A frequent radio and television guest, his daily American Minute is broadcast nationally via radio, television, and Internet. Check out all of Bill’s books here.

This Saturday (June 28), marks the 227th anniversary of Founding Father Benjamin Franklin calling the Constitutional Convention to prayer after several weeks of difficult discussions and frequent impasses. The Founders well understood the need to seek God and the important part that God played both in establishing this nation and in the writing of the Constitution. 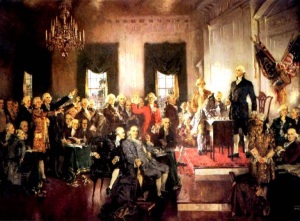 As Alexander Hamilton reported after its completion:

For my own part, I sincerely esteem it a system which without the finger of God [Luke 11:20] never could have been suggested and agreed upon by such a diversity of interests.

It is impossible for the man of pious reflection not to perceive in it the finger of that Almighty Hand which has been so frequently and signally extended to our relief in the critical stages of the Revolution.

As far as these delegates were concerned, the finger of God – that is, His Divine power – had guided their writing of the Constitution.

Benjamin Franklin also believed this to be the case, explaining:

[I] beg I may not be understood to infer that our general Convention was Divinely inspired when it formed the new federal Constitution . . . [yet] I can hardly conceive a transaction of such momentous importance to the welfare of millions now existing (and to exist in the posterity of a great nation) should be suffered to pass without being in some degree influenced, guided, and governed by that omnipotent, omnipresent, and beneficent Ruler in Whom all inferior spirits “live and move and have their being” [Acts 17:28].

As to my sentiments with respect to the merits of the new Constitution, I will disclose them without reserve. . . . It appears to me then little short of a miracle that the delegates from so many different states . . . should unite in forming a system of national government.

Benjamin Rush, a signer of the Declaration from Philadelphia who closely monitored the proceedings, concurred, openly testifying:

I do not believe that the Constitution was the offspring of inspiration, but I am as perfectly satisfied that the Union of the States in its form and adoption is as much the work of a Divine Providence as any of the miracles recorded in the Old and New Testament were the effects of a Divine power.

(For more about the Founders’ views of the “finger of God” and what that meant historically, see the article on this in the Founders’ Bible, from Luke 11:20).

As we look forward to celebrating America’s 238th birthday next week. Let us remember that God truly has had His hand involved in the formation of our government and let us take time out, as George Washington recommended, “to acknowledge the providence of Almighty God, to obey His will, to be grateful for His benefits, and humbly to implore His protection and favor” on America again.