Jesus gave himself for ME,

so He could give Himself TO ME,

so He could live His life, THROUGH ME.

Tagged as Adrian Rogers, Jesus, me

the character of God

the Grandeur of God.


When Jesus did Miracles,

UNITY OF THE HEAD AND BODY

Among earthlings, the head of a body is very much a part of the body, but inside the head the processes of activity and of life itself are formulated which control the body. Moreover each body is totally subject to the signals of the mind inside the head. Any exception would be recognized as a crippling disease. This is simple enough, but what is the point? Think with me for a moment.
These earthly entities are used to illustrate and parallel spiritual realities. Consider that deep in the heart of Hebrew history, the installation of kings, prophets, and high priests were accomplished by the anointing of oil on the head that ran down on the body. The oil symbolized the Holy Spirit of God which accompanied the anointing, and empowered the anointed one with the necessary capacity to fulfill his newly bestowed role.
In fulfillment of that type, the God/man Jesus, in the fullness of time, submitted Himself to the baptism of heaven’s messenger, John the Baptist. It signaled the official beginning of the ministry He came to earth to fulfill: that of our prophet, high priest, and king. Accordingly, in keeping with the type, immediately following His baptism, the Holy Spirit descended upon him in a form similar to a dove, and the heavenly Father voiced His approval. Jesus, the head of the New Covenant would constitute, in His ministry, an appropriate body for the head. That body is His New Testament Church, which was also anointed with the Holy Spirit on Pentecost. The term “anointed” is English. In Hebrew, it is “Messiah.” In Greek, it is “Christ.”
Understanding these things causes several scriptures to become more meaningful to the Bible student. It is the purpose of the church (the body) to be in compete submission to the dictates of the Head (Jesus). In spite of earthly difficulties, the body will one day rule and reign with the Head as His glorious bride.
Consider such verses as Rev. 11:15, “. . . The kingdoms of this world are become the kingdoms of our Lord, and of His Christ. . . “Without question, “Our Lord” is none other than Jesus. His Christ (anointed body) is His church. Psalm 2:2 states, “. . . the rulers take counsel together, against the LORD, and against his anointed. . .” “LORD” is “Jehovah,” the office God (Elohim) uses to reach out to fallen man. His anointed here references His church (anointed body) whose divine offerings to men from the Head continue to be rejected.. The apostles quoted this very verse in rejoicing at their tribulation, Acts 4:24-30.
Make no mistake about it, God works among men through His anointed body, and there is great unity of the body with its head.

The Greek (or Hebrew) Down the Street.

Hey! Don’t you get tired of hearing about the “Greek” text? The Greek says this or the Hebrew that in the original….blah blah. Or how about this one, “it should be translated as…”  As if they know better than the Translators… “God Forbid” . Must be some sort of logical fallacy there: “Appeal to Authority” or other smelly “Red Herring” of some such.
One of my old pastors used to say he “knew the Greek too, and he lived down the street;” name of Zorba or something like that I think. The point being you don’t need the Greek; you need what God has promised to providentially preserve for you  in your language.(Psalm 12:3-8)  English word origins would serve us better. Hey! IMHO, yea. And here’s a poem which pretty much says it all…welllll alot of it anyways.~SM

I heard the old-time preacher speak
without one reference…


If you read the Bible and don’t find Jesus,

go back and reread it.


If Jesus Christ is still in that grave

but if He came out of that grave,

nothing but that really Matters.

The World in the Church. 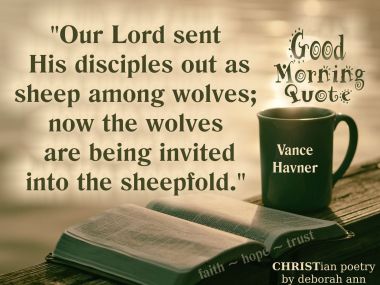